Underlining the justice for the war victims, British Foreign Minister Liz Truss said the government of the United Kingdom is mounting evidence over Russian President Putin’s butchery against the Ukrainian people. The UK is also looking forward to providing justice to the perpetrators of these crimes.

Further, she asserted the UK is assisting International Crime Court and supporting Ukraine’s investigators with a team of experts to consolidate evidence against Russian President Vladimir Putin.

Foreign Minister wrote on her official Twitter account that “Credible evidence is mounting of Putin’s butchery of innocent Ukrainian people. The perpetrators of these crimes must be brought to justice, and the UK is assisting the International Crime Court, supporting Ukraine’s investigators with a team of experts to collect evidence.” 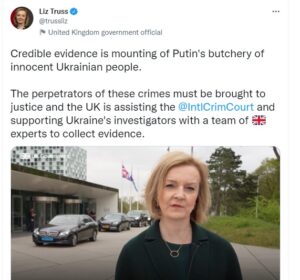 While sharing her concerns, Truss stated during an interview in the Netherlands, “We are seeing the horrifying reality of Putin’s war against the Ukrainian people. Credible evidence continues to mount innocent civilians being butchered, raped and tortured.”

“The perpetrators of these heinous crimes must be brought to justice. That’s why I am here in Hague, in the Netherlands. The UK has a strong track record of investigating, prosecuting and preventing crimes.”

Further, she reiterated, “we are assisting the International Criminal Court in their vital work. We will help Ukraine’s investigations by sending a time of British experts to collect evidence on the ground in Ukraine. We will not rest until the perpetrators of these appaling crimes are brought to justice, Truss added.

Since the beginning of the war, the UK government has backed Ukraine and has taken every measure to help the country in tackling the situation during the Russian invasion.

According to the reports, the UK has facilitated Ukraine with military aid, supply armoured troops and humanitarian aid during the war.

PM Johnson asserted that the UK would back Ukraine until the war’s end. The countries’ friendship has become even more vital since Putin’s illegal invasion of Ukraine.

Previous articleUK to send 8,000 troops to boost British Army exercises across Europe
Next articleHealth and Care Bill receives Royal assent from Her Majesty, the queen