Ben Wallace, The British Defence Secretary, announced that Britain would send 350 more troops to Poland amid unfavourable circumstances between Ukraine and Russia.

During the press conference with Mariusz Blaszczak, Defence Minister of Poland, Wallace announced that the UK government had sent troops to Poland during the border tensions between Poland and Belarus in November.

This comes during talks between the UK Defense Secretary and his Polish counterpart on the response to the build-up of Russian troops near the Ukraine border.

While posting on his official Twitter handle, Ben Wallace announced his meeting with Mariusz Blaszczak, Defence Minister of Poland. He mentioned that the two leaders discussed the impact of the existence of Russian troops near the Ukraine border on European security. 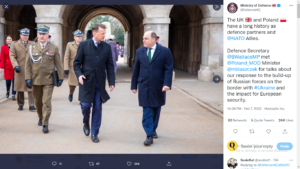 Independent reported during the press conference, Wallace asserted that the UK government would further send 350 troops to Poland and 100 Royal Engineers already in the country in the “spirit of solidarity”.

Wallace highlighted that the decision to send more troops to Poland comes in “helping each other’s resilience challenges” and stressed that the bilateral deployment shows they can work together.

Wallace cautioned that if Russia makes the “foolish mistake” of invading Ukraine, it will face severe sanctions and isolation.

Last week, Putin accused the US of attempting to draw Russia into a war with Ukraine.

He said: “It seems to me that the United States is not so much concerned about the security of Ukraine… but its main task is to contain Russia’s development. In this sense, Ukraine itself is just a tool to reach this goal.”

Wallace asserted that the decision indicates a “strong signal” that both the countries can “stand side by side”. Poland thanked the UK Defence Secretary for the proposal in reply to the UK.

Furthermore, Blaszczak expressed gratitude to Wallace for cooperation with the Poland armed forces on strengthening the security, “especially against the threat on the border,” as per the Independent report. The announcement of deploying more troops comes amid the Ukraine-Russia border tensions.