The United Kingdom continued its support to Ukraine amid the Russian invasion. The country has tried all of its efforts to help Ukraine in every aspect of the war, including providing military aid, supplying weapons, and shelters for the Ukrainian refugees.

The United Kingdom Prime Minister Boris Johnson has been the most critical vocal leader against Putin’s illegal invasion. PM Johnson wrote on his social media official Twitter account that the UK would continue its military and humanitarian support by providing Ukraine with the equipment it needed to defend itself. 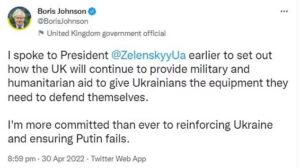 UK’s Foreign Minister Liz Truss said hundreds of troops had been deployed by the UK to destroy Russian convoys. Since the Russian invasion of Ukraine, more than 1,000 sanctions and other entities have been given by the UK.

Moreover, the UK hit sanctions on the 370 Russian oligarchs and their family members simultaneously, close political allies of Russia recognized as “propagandists” and had been hit by sanctions.

The UK has sanctioned 775 Russian delegates since the war began.

The UK government has also provided £400 million in humanitarian and economic aid to Ukraine, and more than two million medical items have been supplied to help during the medical emergency.

PM Johnson met Ukrainian president Volodymyr Zelenskyy and promised to back Ukraine till the end of the war.