After a five-year gap, the Commonwealth of Dominica successfully organized the cricket T20 international matches at the Windsor Park Sports Stadium. Back-to-back two games were held on July 2 and 3, 2022.

The official venue for the T20 cricket match, Windsor Park Sports Stadium, is located in Roseau, the capital city of Dominica. Before conducting these cricket matches, the stadium witnessed four international matches; the first was a One Day International (ODI) played between West Indies and Bangladesh in the year 2009, and the second was also ODI, which was played between West Indies and South Africa in 2010.

The officials of Dominica took special care of the audience’s entertainment and provided a “Carnival-like” environment to the fans and patrons in the interim with the local Dominican cultural presentation.

The Director of Tourism of Dominica, Colin Piper praised the government for the successful hosting of the international matches. He outlined, “The Discover Dominica Authority would like to express its gratitude to the Government of the Commonwealth of Dominica and Cricket West Indies for their efforts and assistance in bringing international cricket back to the country after a five-year absence.”

He further expressed pleasure that the two T20I matches in Dominica on July 2nd and 3rd were fantastic and witnessed a strong turnout of local, regional, and international cricket fans to enjoy the fixtures.

Events Management Executive of Cricket West Indies, Joneé Charles, also lauded Dominica for welcoming international cricket with such enthusiasm. She stated, “We are delighted that Dominica was chosen as the host of two matches, and we also hope to host more in the future. After a challenging two years owing to the pandemic, we must express our gratitude to the local organizing committee and Cricket West Indies for staging these T20I matches.”

Dominica has been able to host international matches on its land because of the efforts of the government. The government has been continuously making efforts to uplift the sports infrastructure in the country.

Recently, the Sports Division of Dominica upgraded the Windsor Park Sports Stadium; the authorities contributed to the refurbishment of the lawn. Earlier, new electronic scoreboards were installed at the Windsor Stadium. Prior to the installation, a protective structure was constructed to ensure the safety of the scoreboard, ensuring a more resilient system. The cost of the scoreboard was near ECD 1 million. The previous board was destroyed during Hurricane Maria hit the country in 2017.

Dominica has been creating stronger sporting bodies such as clubs and sports committees and has also been formalizing the National Sports Council, which is in progress as the documents have been drafted. The government has also been working to put the task force in place and has assigned a coordinator.

The government of Dominica has been uplifting the sports infrastructure through the funds generated through the Citizenship by Investment (CBI) Programme of the country.

Citizenship by Investment of Dominica:

The programme is known to be one of the longest-running, safe and most secure in the world. Launched in 1993, Dominica has been providing alternative citizenship for around three decades.

The funds generated with the help of the programme largely contribute to the development and rehabilitation of resilient infrastructure, including schools, hospitals, healthcare centres, bridges and more. The government has been heavily investing in building the world’s first climate-resilient country which can withstand natural calamities such as Tropical Storms, Hurricanes as well as Cyclones.

The Economic Diversification Fund (EDF) is a government-supported initiative which contributes toward socio-economic development and helps in the upliftment of the country. The fund generated with the EDF goes towards improving projects in the public and private sectors. To date, the funds generated have assisted in the development of schools, hospitals, sports stadiums and numerous sectors such as tourism and agriculture.

The minimum investment required to apply for the alternative citizenship of Dominica is USD 100,000.

To apply under the Real Estate Investment Option, the applicant has to apply for government-approved properties. The minimum investment required is USD 200,000.

About Dominica:
The magical island of the Caribbean, Dominica is a beautiful destination for anyone who wants to explore and discover exquisite volcanic landscapes, jungles, and tropical beaches.
Dominica is home to the world’s second-largest boiling lake and comprises of nine volcanoes that are entirely safe to visit.

Due to so many volcanoes on the small island country, many beaches in Dominica naturally have greyish-black sand. Mero Beach is one of the famous beaches of the Commonwealth of Dominica.

Besides the magnificent volcanoes and beaches, Dominica also has an extraordinary number of rivers. Some of these rivers are cool and clear blue, while others are fast and cloudy, but almost all rivers are surrounded by exotic flora. The Indian River on the island is the widest of all.

Dominica is popularly known as the ‘Nature Island of the Caribbean’. The island also has the largest settlement of indigenous people in the whole Caribbean region. 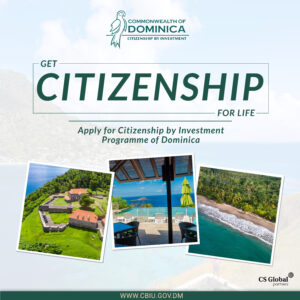