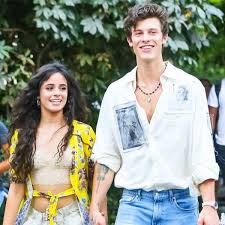 Karla Camila Cabello Estrabao, the popular American singer has opened up n her relationship with Shawn Mendes, the  Canadian singer. The singer revealed that she feels just too lucky and happy, every time Shawn calls her his ‘Señorita.’ Notably, she also mentioned that Camila loves to see the singer being so sweet and caring to her. Thus, this clarifies that Shawn and her Camila are just like a pod with two peas.

Camila sat for an Interview with Bustle and spoke her heart out for the singer and shared her experience on it has been with Mendes for nearly two years. She said, “I probably have a nurturing attitude because I also like being nurtured. I’m lucky that my partner is the same way.”

Further, the singer, 24 said, “There’s a lot of sweetness and tenderness. I think we’re both sensitive. I’m really lucky to be able to surround myself with tenderness; it’s really important to me.” Additionally, she also clarified that how both of them had been supportive of one another, to tackle the issues related to their body image. The pair have been highly supportive and caring in the way they secure each other through insecurity.

Camila then noted, “[He] would tell me like, ‘Dang, I have these kinds of thoughts or whatever.’ I think that him talking about it has been a really big step in transforming that relationship with his body. I certainly feel obsessive, [like] I need to go to the gym, I need to do this, I need to lose weight quickly. I’ve felt like that. That’s the societal voice in your head.”

However, Camila is often facing body shaming and harassment on various social media platforms and also detailed the recent incident of her photoshoot at the beach. Hence, the singer said that all these issues badly affect and hurt and also a person keeps on to think the same thing.

In addition, Camila has clarified that she finds herself to be insecure the entire day and everything was just changing on how she was eating and what she wishes to, and yes, the ‘Senorita’ is all messing it up. Although Cabello after this incident took place has bravely accepted herself and her body and loves herself, the way exactly it is.

Adding, to her emotions, Camila in a statement said, “You can work out a few hours a day and never eat carbs and whatever, but that’s just not a balanced life. That’s not what I want… I can’t change to fit that mold. I’m going to wear whatever, and if there’s paparazzi around, that sucks, but I’m not going to completely reroute who I am for that.”

The struggles of the singer are just never-ending, aside from the relationship she is just worried about her friends too, as she is all day with her mother, Sinu. The Cuban -American singer and her mother appear to be inseparable, also once said ‘the better half of my brain,’ and referred to Sinuhe Estrabao.

Also, it is being noted that Camila, every time being asked to share the minute details of herself turns out to be blank, and thus her mother helps her out and provides the last moments suggestions to her.

Things are turning harder for Cabello to build and grow her bond of friendship and she claimed, “It’s hard for me to get close to people. [My mom and I] would always, after work, go to dinner. Go get sushi together, go for a walk. It was always me and my mom. Probably to the extreme. Because I never had any friends.”

In 2018, Camila and Taylor Swift, the American singer toured and this helped Camila a lot to add few more celeb friends. Thus, she said, “Taylor has always been so kind and supportive and also goes out of her way to give you artist advice. [She’s] really about making friendships and relationships the most important thing. She is so brave at watering those seeds of friendships and relationships.”

Also, she stated, “She [ Taylor] always answers my texts and she’s so busy. I don’t even answer texts because I’m just worse at it. It takes intention to be like, ‘Let me write all my friends back.'”

Previously, Camila was in a relationship with writer Matthew Hussey and they meet on the set of ‘The Today Show.’ The ex-pair was together for about a year, i.e., February 2018 to June 2019.  Later, in 2019 she began to date Shawna and their Chemistry and tunes set perfectly.

Later, Shawn and her Senorita, were in huge media Controversy that they both began their relationship just to gain the highlights and publicity. However, later, the Canadian singer, Mendes denied such rumors and just clarified, ‘it was not a stunt to gain the attention.’

On the other hand, previously, Shawn was linked to Hailey Baldwin and they made their first public appearance together in May 2018, at the Met Gala.

The pair has been a suffered fo anxiety and depression and has often seemed the advice for the experts to get rid of anxiety.

While working for the ‘In My Blood,’ Shwan discussed all this and mentioned that he had been undergoing therapy to help him get free from the mental health condition. He later said, “I spoke to a therapist a couple of times […] Therapy is what works for you. Therapy is listening to music and running on the treadmill, therapy is going to dinner with your friends—it’s something that distracts you, that helps you heal and so it just depends on what you think therapy is.”

He also said, “I made a conscious effort to be more connected to the people in my life. I found I was closing myself off from everybody, thinking that would help me battle it then realizing the only way I was going to battle it was completely opening up and letting people in.”

Additionally, Shawn has made clarifications related to his gender and has said he is not gay and also ‘this shouldn’t make a difference if I was or if I wasn’t.” Further, he also joked that the focus of the media must be on his work, not on his sexuality.